Teaching Citizenship in a Divided America 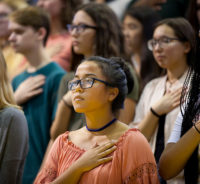 The past several decades have marked an era of “college and career” in America’s schools. The two C’s echo in school hallways, driven by a political priority on economic competitiveness. But since the tectonic presidential election, as we’ve seen the ascendancy of attacks on our institutions and been stunned by the march of hate groups and attendant deadly violence, the drumbeat has grown louder for schools to revitalize student preparation for the third C: citizenship.

Teaching citizenship is a foundational purpose of our education system. Our public schools have not abandoned that mission, but since the 1980s, schools’ civic purpose has taken a backseat to economic concerns in attention and investment. Federal and state policies have given scant priority to civics education.

In a slow bleed, we now see consequences of that neglect. For some time, late night TV hosts have taken cameras to the streets to illustrate that many Americans can’t name the three branches of government or either of their senators. But far more worrisome are recent survey findings showing that fewer than a third of young Americans feel that it’s essential to live in a democracy. That startling revelation has many asking: within what set of understandings about democracy and the American idea are students processing the affronts to democratic norms that now infuse every news cycle?

Groups such as the Civic Mission of Schools have long sounded the alarm over the policy lag and advocated for systematically strengthening civics education. Former Supreme Court justice and Civic Mission co-chair Sandra Day O’Conner founded a nonprofit whose civics curriculum is now used in middle schools nationwide.  Others have been spurred to develop curricula and teaching tools designed to capture students’ imaginations and provoke deliberation and debate over dramatic crisis points in U.S. history. Policy action has been much slower in coming, but that’s changing as well. California, for example—our largest state—recently adopted a social studies framework that powerfully stresses civics education and the teaching of habits and dispositions of citizenship.

A sticking point, however, is the hot button nature of current events. Civics teachers are thrilled with the new urgency and with students’ sudden impassioned interest in civic affairs. But the very hyper-intense political climate sparking this interest is also polarized, creating a thorny problem for some teachers. How can civics teachers do exactly what’s needed and expected—that is, engage students, especially high school students nearing voting age, in exhilarating topical debates that prompt deep inquiry and critical thinking—without courting a backlash from parents or interest groups? A Kansas teacher’s statement to a reporter captures the chilling effect some teachers feel: “All of a sudden it seems to be taboo to talk about government, politics, civics.”

This dilemma, and how to deal with it, has been artfully addressed by Melvin Patrick Ely, a former high school teacher now professor of humanities at the College of William and Mary. In a commentary in Education Week, Ely seizes on the imbroglio over Confederate monuments and statues as an extraordinary teachable moment, one focused on front page news that’s laced with emotional and historical complexity. It’s a lightning rod issue and, at the same time, one tailor made for teaching citizenship skills of deliberative critical inquiry.

By discussing how one teaches the monuments controversy, Ely provides an exemplar of good civics teaching and how it avoids being ideological. He also underscores why such teaching is indispensable. The civics teacher’s frame is not who’s right or wrong—the kind of thing that indeed invites push-back. Instead the teaching focus is on the crucial questions a given issue elicits, the historical knowledge required to address them, and the examination of the values that underlie conclusions drawn or actions taken.

Ely grew up in Richmond where, as a young child, he cried upon learning that Robert E. Lee was on the losing side of the Civil War. Much later he learned that Confederate leaders openly called slavery the cornerstone of the Civil War. Later still he confronted what many of us are only now coming to see—that construction of Confederate monuments peaked in the 1910s and 1920s as part of Jim Crow and in the 1950s and 1960s in response to the Civil Rights movement. In other words, while some view the monuments as honoring war heroism, most of them memorialize efforts to deny basic rights to African Americans.

It’s crucial for educators to teach such history when delving into controversial current events. At the same time, they need to seize the opportunity to help students think critically, first by raising the most obvious questions, then by guiding students more deeply into particulars that force confrontation with further layers of questions. In Ely’s example, that means using the monuments to frame for students, “in ways that promote inquiry and reasoned analysis,” the debate over what to do with them.

He would start with the proposal being floated to put the monuments in context by fronting them with explanatory signage. Who erected them, where and why? As students research and discuss this, they would run headlong into new controversies over who controls the signage content. In turn, that would lead students to ask: Can anyone countenance memorializing a fight for slavery? What to make of defenders of Confederate heritage who are not alt-right but consider it “desecration” to contextualize the monuments?

He would have students probe further by examining and debating a broader array of American monuments:

“They could debate whether we should mothball every statue that commemorates a flawed person; however, they would soon realize that this could leave us with no monuments at all. They would also discover that even ownership of slaves, if adopted as a winnowing device, would wipe out much of the American pantheon, disqualifying not only Washington, Jefferson, and Madison, but also John Winthrop and Benjamin Franklin.

“Some students might propose an amnesty for slaveholders who eventually opposed the institution or provided for their own bondpeople to go free; that would “winnow back in” Washington and Franklin. But what, a good teacher might then ask, do we do about a person who denounced slavery eloquently and drafted the Declaration of Independence, yet expressed racist views and freed almost no enslaved people?”

These are hard questions, which is, of course, the point. We need our civics teachers to keep prompting students to wrestle with such civic dilemmas, and we need our states and local school boards to enact policies that have those teachers’ backs. The lesson is that democracy is hard and messy. Some students may think there are easier paths to getting things done—for example, capitulation to an autocrat. But those same students, drawn into thought provoking research and intense debate over difficult issues, may find their values and voice. Odds are, once they do, they won’t any longer be willing to put them at risk.