California Jolt: State Upends How It Funds and Runs Education 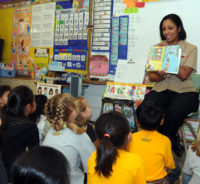 It’s hard to find stories of “upheaval” in the way states structure the machinery of public schooling. Wrangling interests tend to allow only a little tinkering under the hood. But California right now is rewriting that script. And the sweeping changes occurring in the state’s education system are so politically stunning that those inured to paralysis in Sacramento stand slack-jawed.

Not only is the nation’s biggest state calmly implementing the Common Core State Standards that have roiled the waters in a number of other states. But to bolster the success of those higher academic expectations, the Golden State is revamping its entire education architecture, from how dollars flow to schools to how teachers and principals are supported and held accountable.

The changes take dead aim at reversing a longstanding lag in student achievement and, especially, narrowing the socio-economic achievement gap in a state whose schools were once the envy of the nation. The animating force is the new Local Control Funding Formula, the linchpin of 2013’s authorizing legislation. Phased in over eight years, the LCFF obliterates the state’s old finance system long denigrated as ineffective, dizzyingly complex and, above all, inequitable. In its place is a weighted approach that provides a basic level of funding for every student then targets additional funding to districts with large numbers of students who are more expensive to educate–those from poor families, English learners, and foster children.

While many state funding formulas use a weighted approach to try to account for the higher costs of educating different groups of students, California is taking an extra step. In a profound turnaround, and in keeping with Governor Jerry Brown’s principle of “subsidiarity,” decision-making responsibility for how to spend the money has been handed to local school districts.

This flips the norm established more than 35 years ago with Proposition 13, the landmark property tax limit, when the state became the school funding distributor as well as decider, largely dictating how locals could use the dollars. Over time, highly regulated “categorical” or specific-purpose programs proliferated.

The one-size-fits-all approach became increasingly counterproductive as the state’s diversity exploded in the 1980s. And now, decades later, local educators are being given back the reins. Instead of compliance, their new mandate is to go forth and be creative. Innovate. Make the money matter. Work with your communities to dig into evidence about which kids are struggling with what, and why. Agree on top improvement goals and map out a plan that ties your budget to the actions you’re going to take–actions that will help teachers and administrators know and continually get better at using the most effective practices.

Reaction in the state’s 1,000 school districts is a stew of excitement, energy, and concern. You’d be hard pressed to find educators who don’t applaud the aspiration to level the playing field for the least advantaged kids; more than half the state’s six million public school students are low income. Beyond that is the new law’s philosophic underpinning: it’s an implicit vote of confidence in California’s educators, the opposite of the test-and-punish mode that prevailed nationally under the federal No Child Left Behind act.

At the same time, there’s a near-audible gulp. Local school leaders who have complained for years about being hamstrung by Sacramento’s restrictions now face, for starters, mindset change. But even exuberant local visionaries know that navigating conflicting parental and community interests can be daunting without the lever of “the state requires it” to push things forward.

The state, of course, still must hold schools accountable. Doing so will now occur by way of each district’s annually updated plan that spells out its needs, priorities, and goals within eight statewide priority areas. The priorities start with student achievement but also include less tangibly documentable factors as school climate, student engagement, and parent involvement.

The local planning process has begun, even though details such as progress measures and a promised new system of improvement assistance are not yet fully in place. Watching intently are vocal advocacy groups who worry that too much local flexibility or insufficient transparency, especially for reporting on spending, may translate to diminished services for the very students the LCFF aims to accelerate.

Despite much optimism, no one sees this as a panacea in post-Proposition 13 California where investment in education has, for decades, languished below the national average and sank even lower during the recession. The new law’s passage was made possible in part by good government victories–i.e., voter approved changes in legislative and election rules that finally broke legislative gridlock. But a pivotal other factor was the ballot success of Governor Brown’s big 2012 gamble: Proposition 30, a temporary tax increase that averted further draconian cuts in recession-decimated school districts.

Since then, California’s budget has massively rebounded. But even if activists manage to extend Proposition 30, which fully expires in 2018, and if projections of a long stretch of black ink are correct, it will take years to restore many school districts to pre-recession levels, nevermind to raise base funding from a level that’s widely seen as inadequate.

The position of Brown and the state board of education is that the kids can’t wait. By clearing away resource-sucking regulations and accreted categorical programs, instead unfettering education dollars to be directed to actual school and student needs, they’re betting the state can turn the page on achievement mire.

Are their ambitions quixotic? Not according to years of research findings, notably from an unprecedented set of California school finance and governance studies prompted by the student outcome urgency. Anchored at Stanford and undertaken by national experts–including current State Board of Education president Mike Kirst–the studies culled from experiments in the U.S. and abroad. Findings explicitly called for replacing the “fundamentally flawed” status quo with a system that would “improve the alignment between the accountability system and the decision-making responsibilities, increasing flexibility at the local level.”

Guided by these studies, the state is buttressing the LCFF with a pre-emptive system of educator support to be orchestrated by a new state agency, the California Collaborative for Education Excellence. With 10,000 schools and nearly 300,000 teachers, there is intense focus on the problem of uneven local capacity–for aligning classroom practices with the Common Core; for ensuring skilled principal leadership; for revamping district management and budgeting strategies. One favored capacity building approach is to support cross-district partnerships to fast-forward the spread of best practices, using a model pioneered in the state by a group of mostly big districts.

As implementation unfolds, developmental glitches are inevitable. With criticisms simmering among advocates of tighter control, there may not be much leeway for missteps. But the governor is adamant that the state should remain hands off, giving local flexibility time to find its footing before making dramatic adjustments. So far, with momentum stoked by the political miracle of getting this far, the odds for success appear to be on his–and the kids’–side.