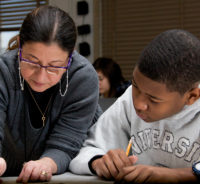 Remember the last time you were part of a conversation about school reform that was balanced, respectful of different perspectives and focused on finding common ground? Didn’t think so. Such exchanges are becoming an endangered species–largely due to the interwoven influences of ideology, money and power. And the result is that we’ve handicapped our ability to make progress that benefits students.

We need reform, so that all U.S. schools are well run places with high quality teachers and high expectations for students. But pitched battles driven by this trilogy of interests remote from student learning won’t get us there.

Let’s have a closer look.

Ideology. School reformers are increasingly behaving like zealots. Rather than confront the long-term, gritty challenges of implementing changes needed to fundamentally improve public education, there is a tendency to turn inward to squabbles and debates over the latest new idea–a much less difficult task. It is naïve to believe that any one entity or idea alone can bring about changes at the scope and scale needed, yet the ongoing emphasis of educational discourse shows that ideological hubris is found in every corner.

Money. School reform is big business. The corporatization of school reform is leading many organizations, for-profit and non-profit, to market their latest quick fix–regardless of their actual track record in helping schools improve. The incentive? There is significant money to be made, even when the quick fix doesn’t fix.

The counterbalance to the misuse of resources lies in the potential influence of private sector philanthropy. Many foundations, both local and national, have long histories of working to improve the public schools. They have played a pivotal role in spurring innovation. Yet a recent philanthropic trend is undercutting their efforts. According to The Foundation Center, more than sixty percent of foundations refuse unsolicited proposals and the number is growing. Creative ideas from the field, with the potential to catalyze change or provide alternatives to ideological thinking, are less likely to be funded now than ever before. The result is a lessened impact of private philanthropic dollars.

Power. Power is tied to politics. School reform, always in the public eye, is politically-charged at federal, state and local levels. Power politics, backed by ideology and money, thrives on polarization. Resulting debates satisfy adult egos but do little to identify real solutions. When we make policy in terms of who among us wrests the power to impose a narrow version of the “right” answer, what we get is a new round of arguing and resistance–not the constructive change students need.

What’s long overdue is a new type of collaboration and creativity that transcends the barriers of ideology, money and power. Rather than accentuating differences, practitioners, policy-makers and community members need to build on differences to create something that’s better than solutions any one group can develop.

How might such collaboration and creativity start to play out? Consider two areas of current and escalating controversy: educator evaluation and common academic standards.

Teacher and Principal Evaluation. At first, there seemed to be ready consensus here. Because the field of education has long been on “automatic” when it comes to evaluating teachers and principals, there is widespread understanding that evaluation systems need to improve.

But implementation has come with fraught questions: what’s the purpose of the new evaluation systems–accountability, support or both? Are they fair? How do we link teacher evaluation to student academic growth? Do we have the skills and tools to make the new systems work?

Ideological proponents of new evaluation systems argue for full steam ahead. They can be myopic, characteristically failing to distinguish between kneejerk opposition to anything new versus legitimate concerns about what’s needed for effective implementation. Ideological opponents, in turn, challenge the very foundation of the new systems. Results in the field are predictable: problems of quality, consistency and manageability hinder the nascent systems.

We need to stop being our own worst enemy. This means focusing on the most critical question: how do we balance urgency for change with the capacity needed by frontline educators to make improvements? We need to decide how we can better create an evaluation system that works for educators and students, rather than placing blame.

New Standards. Proponents of the new standards for student learning (often called the Common Core State Standards) promise better academic standards as well as better assessments that are aligned with the standards. Opponents range from those who raise legitimate questions about the field’s readiness to implement to those more on the fringe who fear that common standards will usher in a federal takeover of state and local decision-making authority.

States find themselves forced to take steps to avoid the ideological clash. Quality implementation becomes the stepchild to games of nomenclature. Suddenly we have “College and Career Ready Standards” or “State X’s Academic Standards” that are essentially the Common Core under a different name.

Meanwhile, the voices of teachers are often not heard sufficiently. As a teacher in a mid-Atlantic state notes, “First, they should have introduced the new standards, then the new assessments, and only then used the standards and assessments for purposes of evaluation. They got the sequence wrong. We support the standards but haven’t been prepared to do this work well.”

Again, we see the importance of balancing urgency with the need to build the skills of educators to implement new systems at a high level of quality. We must create common cause and take genuine responsibility for supporting our frontline educators in preparing students for the future.

There is a different way of conducting business. One promising example is the agreement in Maryland between the state department of education, the state teachers union and six other major associations that are working together to support teachers and principals to implement student learning objectives effectively. This approach to teacher and principal evaluation is based on strengthening instruction and improving student learning. Surmounting partisan differences over evaluation systems, leaders in Maryland are moving forward purposefully with a new kind of broad-based agreement that focuses on supporting frontline educators.

Forging ahead requires persistence and will. It also takes collaborative leadership that moves beyond the divisive influences of ideology, money and power to focus on the needs of students and educators.